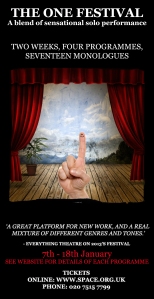 Last night I went to the One Festival to see five solo performances (including SMS, a piece I wrote). The only criteria for the festival is that pieces can only have one person on stage. Mostly this means traditional, character-based monologues. Although in the night I saw, there was also some comic puppetry, with a good dose of audience interaction.

The monologue can be a powerful form.  Some of the most powerful short plays I’ve ever seen have been monologues. There’s something about a direct address that can be gut-wrenchingly good. At their best, solo performances can be incredibly engaging.

The flipside? There’s nowhere to hide in this form. You can’t disguise mediocre writing or lack of ambition. And, as an audience member, if you don’t like the character, you’re stuck. (At least until the next monologue comes along.)

Props to the One Festival, though, for showcasing solo pieces like this. It’s a great festival, and well worth attending if you’re partial to monologues. It was also my first time at The Space, a really special small venue in the Isle of Dogs. The space is a converted church, and it’s incredibly atmospheric.  It felt a bit special to be programmed there.

As for my piece? It was the first monologue I’ve ever written — I doubt it will be the last. It’s such fun to explore a single voice, a single viewpoint. And I was very happy with how it went.

View all posts by mariannepowell